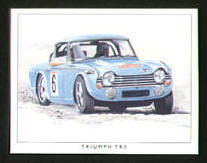 Ecurie Triumph is the sports car racing arm of TSOA and was founded in the early 1960’s.  Today the tradition of Triumph sports cars in motorsport continues unchanged  under the Ecurie banner.  The John Thompson Trophy is awarded each year by the club to the most successful Ecurie Triumph driver.

Membership to Ecurie Triumph is open to TSOA members who hold an open CAMS racing licence and compete in the Group S racing series in a Triumph car.