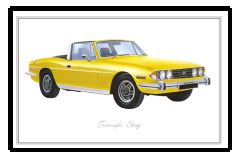 As asterisked above, All Triumph Races were held in conjunction with TSOA National Meetings in 1981, 1982, 1985 and 2010. Race permits were obtained from CAMS and these events were typically run in 2 heats during one of the competition days. Qualifying times were taken from the morning lap dash runs. Graeme Rutledge also found success at these events, taking a particularly fortunate win in Race 2 at Adelaide International Raceway when his GT6 broke a crankshaft on the last lap and “Gentleman Bob” Anderson coasted to the line behind Graeme to give his interstate visitor the win.

Results from these events were:

AGM
Our AGM is scheduled to be run in conjunction with our October meeting in Carlingford.